What is a Sprint Burndown Chart? – ACM 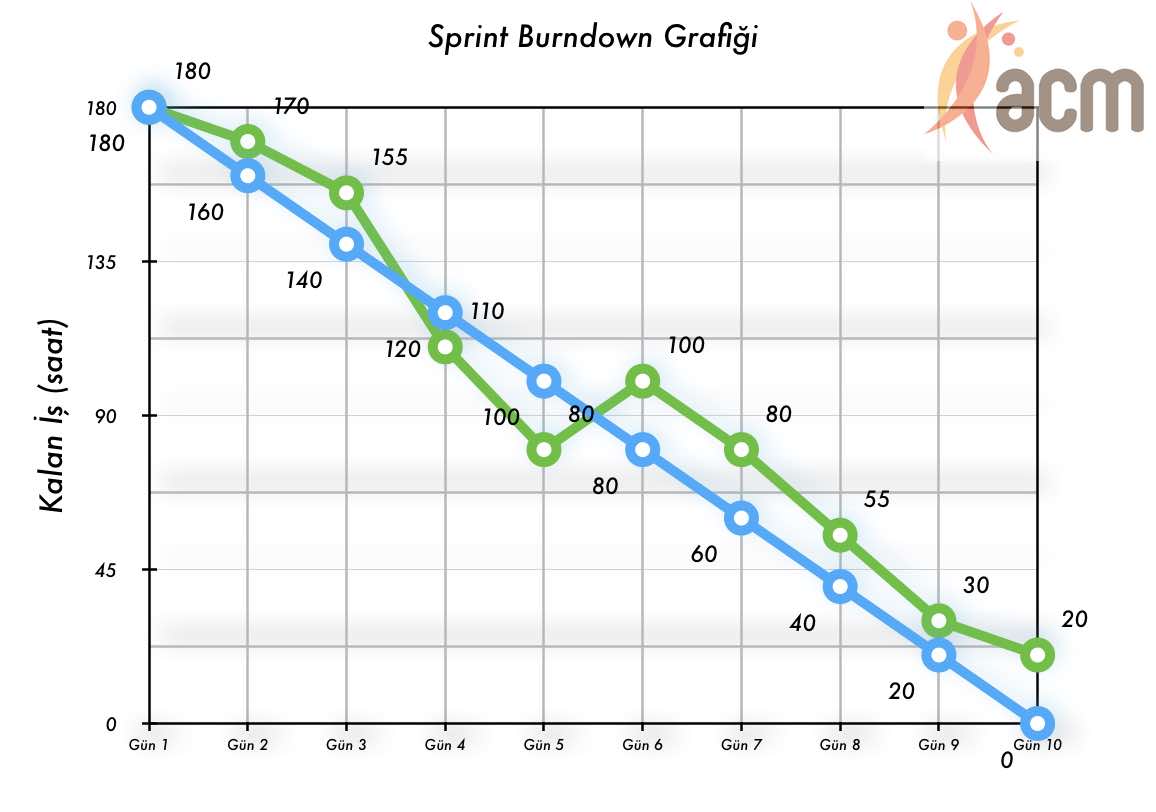 What is a Sprint Burndown Chart?

Every Sprint in Scrum is a project of its own. The target is to achieve a goal in each Sprint, which is a short time period. This goal, which we also call the Sprint Goal, is actually the team’s main direction consisting of a combination of jobs that the Scrum Team adds into the Sprint. The team should not answer only three questions every day in the Daily Scrum meeting. The real question is: “Where do we stand as a team to reach this Sprint Goal, how are we doing?”

One of the visual tools that can show this information best is the Sprint Burndown Chart. This is a quite simple chart showing the days of Sprint in the horizontal axis and the remaining work in Sprint in the vertical axis. It is a chart that is widely used in Scrum Teams, where the culture of disseminating information prevails over the reporting culture and self-management culture prevails over command and control.

This is also in line with a characteristic of Sprint Backlog suggested by the Scrum framework.

You can see below the Sprint Burndown Chart of a team that monitors the work remaining in Sprint in terms of “remaining hours”. This team can clearly show the team’s overall pace and capacity in general by drawing every Sprint in different color on the same A3 size chart. It can be clearly seen that the team runs 3-week Sprints and the total hours of the remaining work after Daily Scrum on each day of Sprint. We can quite easily make the following comment based on the successive Sprints on the same paper. The team was far from finishing the targeted jobs at the end of the first Sprint, probably acted too cautious in the second Sprint and finished the work in Sprint quickly this time and received additional work on the fifth day of Sprint without deviating from Sprint Goal in line with the priorities of the Product Owner. The team’s capacity and speed of finishing jobs are seen as from Sprint-3. Transparency is so high that, it is even clear that this team passed through the natural steps of Tuckman Model and finally become a well-functioning team thanks to these overlapping Sprint Burndown Charts. This is a good example of the transparency we want to create in Scrum teams.

Although it is very common to show the total time remaining in the Sprint Burndown Charts, I would like to mention another practice used in some of the teams I have coached. Hourly measurement may be an indicator. However, if each job in your Sprint Backlog takes more or less the same time to be completed, – splitting each job into small pieces to be completed ideally in one day or less allows you to see the continuous flow – only the total number of remaining tasks (the number of remaining post-its on our To-Do and Work in Progress boards) may also be an indicator. This is also an approach that helps to change the habit of telling, “How much I have worked on a job” information in the Daily Scrum that I mentioned above.

Scrum does not give us an instruction like “Make your burndown charts”, “use hours”. However, Sprint Burndown Charts continue to maximize transparency by showing the Sprint’s progress information on the wall as one of the easiest and most useful practices for the best Scrum teams that know the importance of monitoring the remaining work in the Sprint.